Now that I have a digital camera and don’t need to develop my film to see the pictures I take, I generally have more picture frames than pictures that I wish to display. I actually had an empty frame on a table for nearly a year because we had nothing to put in it. Recently, I printed out some pictures to replace the old pictures I had in frames. While this filled the empty frame that was sitting around, it left me with a different empty picture frame. Instead of going through all my pictures again and trying to find one I liked enough to print out and display, I decided to draw my own picture and put that in the frame.

The frame I used had writing on it that I did not want to show anymore. To fix this, I simply painted over the frame. I used black paint to completely cover the old color. Then, when the black paint was dry, I painted a copper metallic color over it with a dry brush, in a coat thin enough to let the black paint still show.

Remove the backing from the picture frame. I placed the backing face down on a piece of card stock, lining up a corner of each and tracing the overlapping edges, then cut the card stock to size.

Remove the backing and cut the card stock on the lines you just traced. This will give you a piece of card stock that matches the size of the picture frame. On the cardstock, I drew three lines to be the wires for the birds to sit on. 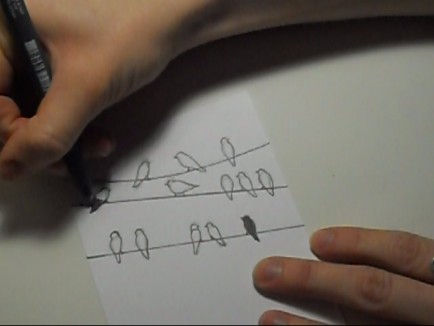 I drew a bunch of outlines of birds sitting on the three wires, spacing them out unevenly, making some of them facing in different directions. After adding feet holding onto the wires and beaks, I filled in the birds’ bodies with pen ti complete the silhouettes.